Over several decades of the 20th century, the art music in the socialist countries of Eastern Europe resided in Prokrust’s sheets of communist ideology. The pattern for this was sewn in the Soviet Union after the October Revolution, and then imposed on countries which, after WW II, had been forced , outwardly or internally into socialism.

The bringing of music to the needs of the revolution began with a radical departure from the entire musical heritage of Europe, and especially its Modernism. In order to open up space for the music of Socialist Realism provenance, this heritage was ideologically proclaimed and rejected. Furthermore, the so-called “bourgeois” and thus retrograde music was sought and found in the works of autonomous creators.

For example, the work of Igor Stravinsky was treated as a paradigm of all the negative phenomena in Western music in the USSR. The leading composers of that time, such as Dmitry Shostakovich, Sergei Prokofiev, Aram Haçaturijan and Visarion Šebaljin, were equally criticized for writing complicated instrumental music and neglecting the orchestral and opera music based on folk music motifs.

By the entry of the communist party into the culture, the art music went from a creative and intimate act of an individual to a political and ideological tool of social engineering. Instead of exploring and expressing the inner drama of human life in the pale, unjust and dangerous world, art music and its creators were used in the socialist order to celebrate and idealize the promised communist future which never arrived. At the same time, they were obliged to participate with their music in the sacralization of the Leader, the Party, the proletariat and the newly created socialist man – the labourer. There was, of course, a place there for collectors, fighters, pioneers and other builders of the bright future.

The primary task of the composer was to spread optimism and faith in the new society, and to support the ideological transformation and upbringing of working people to the extent of the party project of socialism. Primat had massive songs that were supposed to stimulate the feeling of unity and belonging to the communist collective with their futility among the citizens.

The language of this music was simplified to the extreme, so it was homophonic, tonal, with no disonance, while the rhythm was simple and often as the one heard in march music. Melodic inspiration was sought in national folklore. Genres that could easily translate a political message were favored. The composers were asked to compose the programme instrumental music as much as possible. While from the writers of vocal music was expected (required) that they do a mass-production of solo songs, a capella choire compositions, cantatas and operas based on the literary drafts of revolution, the victory in the war and the construction of socialism.

Particullary appreciated were the mass songs, which easily created positive emotions with the listeners because of their simple and flamboyant melody. Since the melody was usually in the rhythm of a march or had a militant character, it was easy to remember and reproduce. It was even easier if it originated from the folk music.

Communist parties used an unseen arsenal of methods and means for forcing the art music and its creators in ideological patterns and dogma: from the ideological and political persecution of inept composers through the ban of the public performance of their work to their persecution and imprisonment. The main performes were the professional associations, in this case composers and music critics. Their main task was to relentlessly protect the Social Realism course in music, ie to detect and sanction the alleged bourgeois deviation from the party canon. 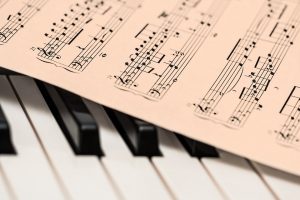