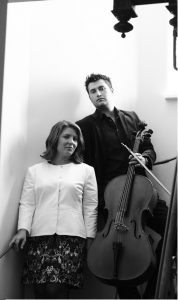 Since 2009, Duo Classique – ALL, formed by Nenad Uskokovic – Cello, and Anca Brasoveanu – Piano, has been taking classical music to new realms, creating a sound through passion, precision, musicality and symbiosis, that is intimate, colourful and  imaginative. The two artists met at the “Colluvio” International Chamber Music Masterclasses, and have been playing concerts throughout Europe ever since. They started out by presenting the classical repertoire for cello and piano to the audience, with every representation bringing new programs on stage, thus enhancing the musical connection between them, accumulating experience, and growing as self-established artists. But as the time went by, they gathered inspiration by going to Jazz – Legends Concerts. It was not long before they had realized that the musical direction of the Duo should also evolve into the less explored areas of the repertoire for cello and piano. Since then, every single concert has brought at least one well known classical Sonata to the audience, as well as a mixture of either own arrangements of Tangos, Blues, modern pieces for the prepared piano, or music of ethnical inspiration. The result is the expansion of the public perception of the classical concert, breaking the boundaries of repertoire, from classical to modern, incorporating own arrangements and premieres of rare, interesting pieces, bringing innovative concerts, designed to attract both new audiences and long-time classical fans, to the listeners.  Hence the Name: Duo Classique-ALL.

Read more about us: