2016- Yet another Easter Tour, this time along the coast of the Adriatic See in Croatia, Bosnia, and a few concerts in Serbia, including the one in the city of Obrenovac, which was one of the most destroyed cities in the floods which had hit Serbia one year before.All the money from the entrance tickets for the concert was given to charity.

Duo Classique-All continued after that with concerts in Germany,including the very successful concert in Munich „Steinway House“,and „Opera and Theater“ Hall in the city of Wiesbaden. Unfortunately, their concert row was interrupted after Nenad hurt his left shoulder badly in a biking accident,and was unable to play cello for 5 months. They did play again already at the end of the year, giving a few minor „come back“ concerts in Munich. 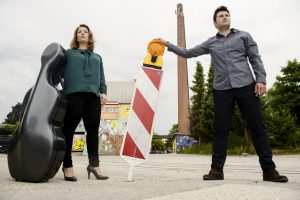